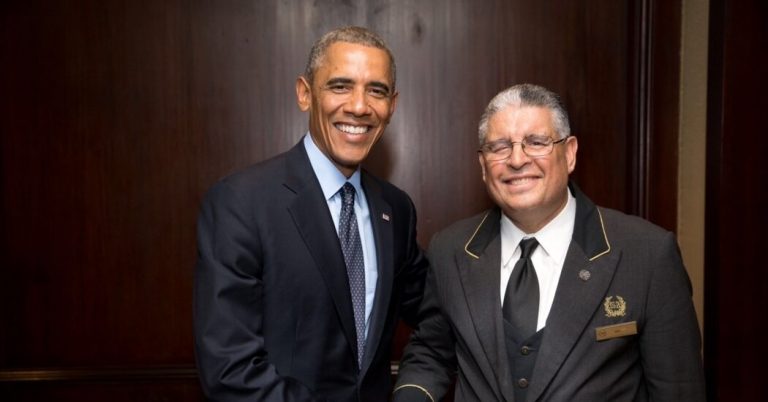 
“He loved acting and music, but knew it would be hard for him to have a career path in that as an immigrant in the ’60s,” Rajaa Elidrissi said of her father. “He also had to send remittances to his family in Morocco. He sought out help from a Catholic Charities organization, and they helped him out with finding the Waldorf.”

He was such a fixture at the Waldorf, his daughter said, that he played a bellhop as an extra — no rehearsals necessary — in several films, including “The Out-of-Towners” (1970), with Jack Lemmon; “Scent of a Woman” (1992), with Al Pacino; and “Analyze This” (1999), with Robert De Niro.

After he retired, Mr. Elidrissi intended to write a tell-some book. It was to include, he said, his reflections, however brief, on every president he had met, from Lyndon B. Johnson to Barack Obama. “He started writing stories down, and I would transcribe them, but we didn’t get to finish,” his daughter Rajaa said. He had plenty to tell.

Such as when Lucille Ball demanded breakfast at 5 a.m., or when Eddie Fisher ordered 40 sandwiches for friends after a late-night supper club performance, or when Jerry Lewis checked in at 3 a.m. and cavorted down a corridor ringing the bells of rooms as he passed.

He remembered encountering Ronald Reagan during the 1980 presidential campaign against Jimmy Carter.

“‘Here you go, Mr. President,’” he recalled saying in greeting the candidate, “and he goes, ‘No, no, don’t call me that yet!’ So I say, ‘Look, Mr. President, you’re going to win and when you win send me something for my son.’ Later that year, he sent us a signed picture made out to my son.”

Gerald Stern, Poet of Wistfulness, Anger and Humor, Dies at 97

Jody Miller, Singer of ‘Queen of the Home’ and Extra, Dies at 80

Beryl Benacerraf, 73, Dies; Pioneered the Use of Prenatal Ultrasound